Unilock Capital Corp. (“Unilock”) is pleased to provide an update on its previously announced qualifying transaction with Small Pharma Ltd (“Small Pharma”). As announced by Unilock on December 2, 2020, pursuant to the terms of a definitive agreement among Small Pharma, Unilock and certain shareholders of Unilock (the “Definitive Agreement”), Unilock has agreed to acquire all of the issued and outstanding ordinary shares in the capital of Small Pharma (the “Small Pharma Shares”) upon the terms and conditions set out in the Definitive Agreement (the “Proposed Transaction”). The Proposed Transaction is expected to constitute Unilock’s “qualifying transaction” pursuant to the policies of the TSX Venture Exchange (the “TSXV” or the “Exchange”). Unless otherwise indicated, all currency references contained herein are to Canadian dollars.

The Brokered Financing is anticipated to close on or about March 3, 2021, or such other date as the Agents and Small Pharma may agree. The terms of the Brokering Financing including the gross proceeds and the Issue Price may change depending on market conditions.

In connection with the Proposed Transaction, Small Pharma has completed a non-brokered private placement of convertible notes (the “Non-Brokered Notes”) for aggregate gross proceeds of $5,000,000 (the “Non-Brokered Financing”). The Non-Brokered Notes bear interest at 6% per annum, mature on July 1, 2021 and will be convertible into Small Pharma Shares immediately prior to the closing of the Proposed Transaction at a price equal to 80% of the Issue Price.

It is anticipated that the acquisition of the Small Pharma Shares by Unilock will be conducted by way of an offer or share exchange in accordance with the laws of England and Wales, being the corporate jurisdiction of Small Pharma. The final acquisition structure will be determined by the parties to accommodate efficiencies for various legal structures, tax and accounting treatment and securities regulation. The Proposed Transaction will constitute a reverse take-over of Unilock by Small Pharma.

Upon completion of the Proposed Transaction, it is the intention of the parties that Unilock will be renamed “Small Pharma Inc.” or such other name as may be determined by the parties and accepted by applicable regulatory authorities.

Agents’ Warrants issued in connection with the Brokered Financing exercisable into a maximum of 4,229,167 Small Pharma Shares.

DIRECTORS AND OFFICERS OF THE RESULTING ISSUER

Ms. Layzell has over 20 years’ experience in the pharmaceutical industry as an analytical scientist and consultant, and has advised multiple large pharmaceutical projects on CMC drug development. Ms. Layzell graduated from the University of Hertfordshire in 1998 with a degree in human biology, following which she worked in numerous Contract Diagnostic Organizations including Prova (R&D) Ltd, Bodycote Testing and Exova Group. During this time, Ms. Layzell managed the CMC development for numerous small molecules and biological entities; supervising teams of analysts and working with formulators to progress development.

Since 2011, Ms. Layzell has worked as an analytical consultant at Eviva Pharma. Ms. Layzell has  worked with Small Pharma since 2015 and assumed the role of Senior Research Manager heading up CMC activities in May 2016.

Dr. Routledge is a dynamic R&D professional and drug development expert with over 30 years’ of experience within UK and US based pharmaceutical and biotechnology companies and the non-profit sector with a focus on drug acquisition and profiling of new chemical entities and biologics. She has held multiple leadership roles across drug discovery and development.

Dr. Routledge’s preclinical and clinical experience spans both psychiatric and neurological indications, with a strong focus on understanding and treating mental health disorders. Roles in Syntex, Wyeth, BTG and GlaxoSmithKline include leading drug discovery and development activities across several therapeutic areas but focusing strongly on neuroscience diseases and with an emphasis on translational medicine.

Dr. Routledge also has experience managing and sourcing opportunities at a semi-philanthropic dementia discovery fund. Other recent expertise includes leading the preclinical and clinical research strategy across Alzheimer’s Research UK for response-mode, strategic funding and for global projects. Dr. Routledge built and led, as Managing Director, an independent and global initiative focused on the early detection of neurodegenerative diseases (EDoN). Dr. Routledge has a 1st Class Honors degree in Zoology and a PhD in neuropharmacology.

Mr. Steel is a Chartered Accountant with extensive international and capital markets experience gained from senior finance roles in both large multinational and SME organizations.

Prior to joining Small Pharma, Mr. Steel spent six years as Chief Financial Officer of Feronia Inc., a TSXV listed African agribusiness, where he led successful debt and equity financings of over US$140 million. Previously, Mr. Steel was Director of Finance for Misys plc, a multinational technology business supplying software to the global financial services sector, where he managed a global finance team of 70+ people located in 11 countries. As well as managing the global finance function, Mr. Steel played an active operational role and managed the integration of a £365 million multinational acquisition. Mr. Steel’s other roles include Group Financial Controller for Fuller, Smith & Turner plc, a UK listed brewer and pub company, and head of Financial Planning and Analysis and Financial Systems at Inchcape plc, a leading global premium automotive group. David holds a BA degree from Abertay University in Scotland and is qualified as a Chartered Accountant in Edinburgh.

Mr. Kimel is a partner at the law firm of Aird & Berlis LLP. Mr. Kimel practices in the areas of  corporate finance and corporate/commercial law with considerable experience in mergers and acquisitions (cross-border and domestic) of both public and private corporations, public offerings (both initial and secondary), private placement financings (including debt and equity offerings), hedge fund formations and financings, corporate governance matters, and the formation and completion of qualifying transactions for companies established under the TSXV CPC program. Mr. Kimel acts as corporate counsel for numerous companies listed on the Toronto Stock Exchange and the TSXV. Mr. Kimel also acts as a director or officer for a number of his publicly listed clients. Mr. Kimel received his LL.B. from the University of Toronto and an Honours degree in Business Administration from the Richard Ivey School of Business at Western University in London, Ontario.

As at the date hereof, the above individuals, own in the aggregate, directly or indirectly, 1,026,609 (44.9%) of the issued and outstanding Small Pharma Shares and 1,000,000 (16.7%) of the outstanding Unilock Common Shares. Based on the current shareholdings, present knowledge of each of Unilock and Small Pharma, and assuming completion of a $58,000,000 Brokered Financing and after taking into effect the Unilock Share Consolidation and the Small Pharma Share Split, it is anticipated that following the closing of the Proposed Transaction, no person or company will beneficially own, directly or indirectly, or control or direct more than 10% of the voting rights associated with the issued and outstanding Resulting Issuer Shares other than Peter Rands, Chief Executive Officer of Small Pharma, who is expected to own, directly or indirectly, 103,188,407 Resulting Issuer Shares representing approximately 33.9% of the issued and outstanding Resulting Issuer Shares on completion of the Proposed Transaction.

The following tables set forth selected historical financial information for Unilock for the fiscal years ended February 29, 2020 and February 28, 2019 and the nine months ended November 30, 2020, and selected balance sheet data for such fiscal years and period. The financial statements of Unilock have been prepared in accordance with IFRS and are denominated in Canadian dollars. 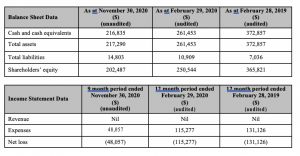 FINANCIAL INFORMATION FOR SMALL PHARMA
The following tables set forth selected historical financial information for Small Pharma for the fiscal years ended February 28, 2020 and 2019 and nine months ended November 30, 2020, and selected balance sheet data for such fiscal years and period. The financial statements of Small Pharma have been prepared in accordance with IFRS and are denominated in British pounds.

The completion of the Proposed Transaction is subject to a number of conditions precedent, including but not limited to satisfactory due diligence reviews, negotiation and execution of definitive transaction documentation, approval by the Board of Directors of each of Unilock and Small Pharma, acceptance or approval of Small Pharma shareholders, obtaining necessary third party approvals, TSXV acceptance and the completion of the Brokered Financing. There can be no assurance that the Proposed Transaction or the Brokered Financing will be completed as proposed or at all.

The Proposed Transaction will not constitute a non-arm’s length qualifying transaction or a related party transaction pursuant to the policies of the TSXV.

Small Pharma was incorporated on February 4, 2015 in the United Kingdom pursuant to the provisions of the Companies Act 2006. Small Pharma’s head office is located at 6-8 Bonhill Street, London, United Kingdom.

Small Pharma is a neuropharmaceutical company specialised in IP led development of novel treatments for mental health conditions, in particular depression. Small Pharma is preparing to launch a clinical program into DMT-assisted therapy in Q1 2021. This program includes a Phase I/IIa trial on their lead candidate alongside development of a robust pipeline of proprietary preclinical assets.

Unilock is a capital pool company created pursuant to the policies of the TSXV. It does not own any assets, other than cash or cash equivalents and its rights under the Definitive Agreement. The principal business of Unilock is to identify and evaluate opportunities for the acquisition of an interest in assets or businesses and, once identified and evaluated, to negotiate an acquisition or participation subject to acceptance by the TSXV so as to complete a qualifying transaction in accordance with the policies of the TSXV.

Forward-looking statements in this document include, among others, statements relating to expectations regarding the completion of the Proposed Transaction (including all required approvals), the size and terms of the Brokered Financing and the expected use of proceeds thereof, the expected share capital of Unilock and Small Pharma immediately prior to the closing of the Proposed Transaction and the capitalization of the Resulting Issuer upon completion of the Proposed Transaction, if completed, the business plans of the Resulting Issuer and other statements that are not historical facts. By their nature, forward-looking statements involve known and unknown risks, uncertainties and other factors which may cause our actual results, performance or achievements, or other future events, to be materially different from any future results, performance or achievements expressed or implied by such forward-looking statements. Such factors and risks include, among others: (a) there is no assurance that the parties hereto will obtain the requisite director, shareholder and regulatory approvals for the Proposed Transaction; (b) there is no assurance that the Brokered Financing will be completed or as to the actual offering price or gross proceeds to be raised in connection with the Brokered Financing; (c) following completion of the Proposed Transaction, the Resulting Issuer may require additional financing from time to time in order to continue its operations which may not be available when needed or on acceptable terms and conditions acceptable; (d) compliance with extensive government regulation; (e) domestic and foreign laws and regulations could adversely affect the Resulting Issuer’s business and results of operations; (f) the stock markets have experienced volatility that often has been unrelated to the performance of companies and these fluctuations may adversely affect the price of the Resulting Issuer’s securities, regardless of its operating peers; (g) adverse changes in the public perception of tryptamine-based treatments and psychedelic-based therapies; and (h) the impact of COVID-19.

The Unilock Common Shares will remain halted until such time as permission to resume trading has been obtained from the TSXV. Unilock is a reporting issuer in Alberta and British Columbia.

Investors are cautioned that, except as disclosed in the management information circular or filing statement to be prepared in connection with the Proposed Transaction, any information released or received with respect to the Proposed Transaction may not be accurate or complete and should not be relied upon. Trading in the securities of a capital pool company should be considered highly speculative.

The TSX Venture Exchange Inc. has in no way passed upon the merits of the Proposed Transaction and has neither approved nor disapproved the contents of this press release.

Small Pharma announces upgrade to the OTCQB® and DTC eligibility

With a focus on innovative approaches and committed to challenging the status quo, we’re targeting the root causes of depression and hoping to unlock the minds of millions.